Akanishi Jin and Yamada Takayuki announce the disbandment of JINTAKA 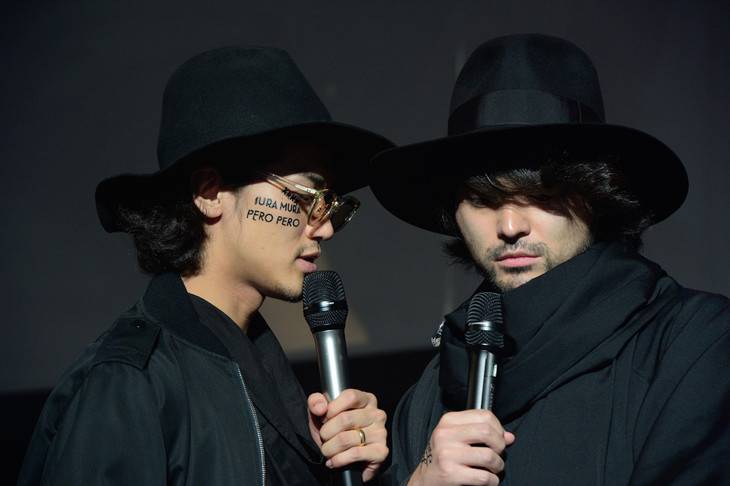 There were two events held on that day, and about 5,000 lucky fans were in attendance. The event kicked off with a performance of "Choo Choo SHITAIN." During the second half of the song, Akanishi and Yamada walked towards the front of the stage and did a call and response with the crowd.

After the performance, the members unfolded a talk corner, saying, "We want to talk a little bit now." On the event, Akanishi stated, "Surprisingly, it's my first time singing on a stage like this. It's not about being an actor or a singer. If you want to sing, then sing, and if you want to act, then act. We are doing this in an entertainment world, so we agreed that we are entertainers." The two also talked about how they have been friends since they were teenagers and how they dreamed about making a movie together.

Following the talk corner was a game corner. In association with the single's title, JINTAKA played a "Choo Choo Pero Pero Game" and a "Pero Pero Mura Mura Game." In addition, they did a Q&A session with reporters. One reporter mentioned, "There are people saying they want to see you two co-star in a film," to which Yamada responded, "Of course, we are thinking about it."

Another reporter asked, "What are JINTAKA's plans?" and Akanishi answered, "Umm, we will disband." While the venue filled with gasps and screams, he continued to explain, "When thinking about our second single, our opinions differed. In addition, we had different goals, which overall led to our decision of disbandment." Yamada further explained, "I wanted our next single to be a ballad, but he wanted rock. Differences in our opinions means that we were unmatched. So, we have no choice but to disband."

After Akanishi commented, "Disbanding sounds really gloomy, but it's a positive disbandment. We are already looking ahead," JINTAKA performed "Choo Choo SHITAIN" again, this time with 10 dancers. They closed their first and possibly final event with a lively performance.