Members of Not yet have a reunion 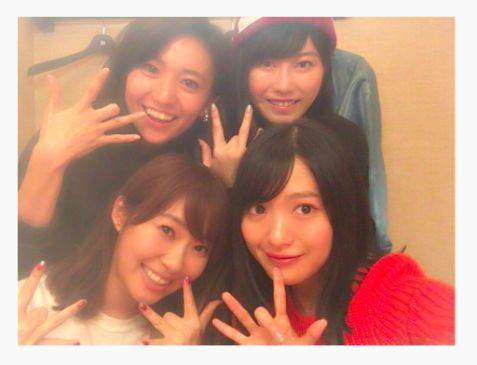 On October 28, NGT48's Kitahara Rie tweeted that the members of Not yet recently got together for a reunion. She attached a photograph taken with former AKB48 member Oshima Yuko, HKT48's Sashihara Rino, and AKB48 General Manager Yokoyama Yui.

Not yet formed in January of 2011 with the four members as a sub-unit to AKB48. Since their debut in March of the same year, they have released five singles and one album. While they have not released anything since Oshima's graduation in June of 2014, the four performed at 'AKB48 Request Hour Setlist Best 2015.'

Fans were thrilled to see Not yet together again leaving comments such as, "These four are the best," "I'm glad to see the four of you getting together," and "I wish you would resume your activities."

The other members also shared about the 'Not yet reunion' with fans on social media sites.

MAN WITH A MISSION Kamikaze Boy's activities suspended after reported to be in an adulterous relationship
6 days ago   0   1,410