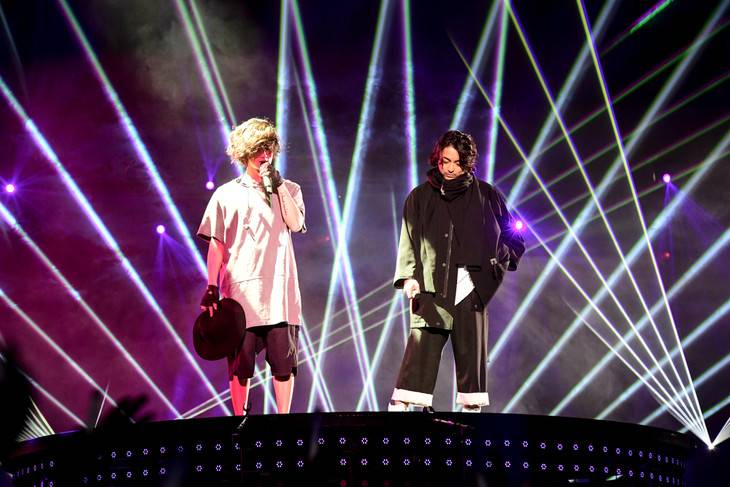 This was the encore to Akanishi's nationwide tour held to commemorate the release of his latest album "Audio Fashion." About 7,000 fans gathered at the venue on this day.

The concert kicked off with an opening movie featuring Akanishi curled up in a ball, naked. He then appeared on stage, dressed, and started performing "Only Human." During the first half of the show, he played the guitar while singing "Eat Ya Heart Out," played the keyboard to "Can't Get Enough," and showed a brilliant performance of "Mi Amor" with laser lights beaming across the stage.

After singing a medley of "SUMMER LOVING?Good Time?Hey What's Up?" with fans, Akanishi greeted, "It's my last live of the year, so please enjoy it without any regrets." Pole dancers took the stage as he sang his ballad "Body Talk." He joked, "I want to watch the pole dance, so I will sing with my back faced towards everyone."

Towards the end of the live, the screen flashed "reuniting for one night only," and was immediately followed by an appearance by JINTAKA made up of Akanishi and actor Yamada Takayuki. After making their debut with their single "Choo Choo SHITAIN" in September, the unit disbanded during a release event in October due to differences in their directivity. Akanishi introduced his fellow member, saying, "Takayuki Yamada!" to which Yamada responded, "I came from Spain." It appears Yamada came directly to the live after finishing his work in Spain. As the crowd broke out in loud cheers, JINTAKA performed their "Choo Choo SHITAIN."

After Yamada left the stage, Akanishi dropped "Opaque" and "OohLaLa" while using a projection mapping technique. He also enchanted the crowd with an aggressive dance performance with dancers during his dance medley "Baila?Temporary Love?Mami Loca?Tell Me Where." His last song was a ballad called "Episode."

Akanishi made his way on stage again for a finale, wrapping up with three songs "TGC," "Miss California," and "Lucky."