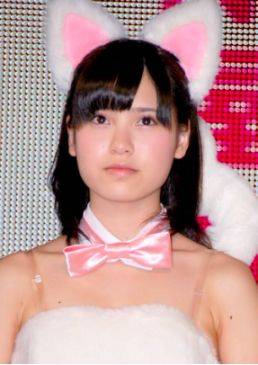 Former NMB48 member and model Matsuda Shiori (21) announced her marriage and pregnancy via Instagram on April 19.

Matsuda uploaded a photo of herself in a wedding dress and wrote, "It's a personal matter, but on April 4, I married my boyfriend whom I had been dating for some time. And currently, I am carrying a new life in my stomach."

She shared her current state of mind, "I feel lost and anxious facing new things such as marriage and pregnancy, but with the support of my husband and family, I am able to spend everyday peacefully. Every time I see my baby grow inside of me, I am given courage and feel the need to do my best."

Finally, she stated, "I am still very immature, but I hope to support each other to build a family full of love."

Matsuda passed NMB48's 1st generation auditions in September of 2010 and entered the senbatsu for their debut single "Zetsumetsu Kurokami Shoujo" (released July 2011). She suspended her activities in September of 2011, returned in January the following year, and graduated later that October. In November of 2014, she began modeling and had appeared in CMs and catalogues. She also served as the regular reporter for ABC's 'Ohayou Call'.