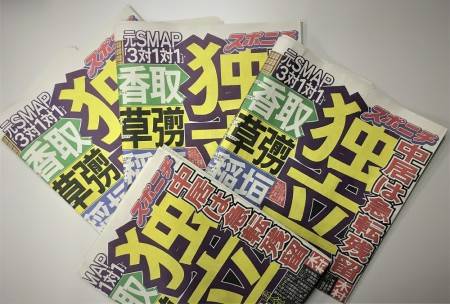 On June 18, it was announced that three former SMAP members; Inagaki Goro, Kusanagi Tsuyoshi, and Katori Shingo, would be leaving Johnny & Associates after September 8.

The announcement was made by Johnny Kitagawa, the president of Johnny & Associates.

According to the announcement, "As we accepted the requests from Inagaki Goro, Kusanagi Tsuyoshi, and Katori Shingo, our management contract with those three will expire on September 8."

Until the day, the company will continue to be in charge of their management.

Regarding each of their future activities, they will be holding press conference individually as soon as the details are settled.

The president, Johnny Kitagawa, left a comment,
"After SMAP's disbandment on last New Year's day, the way I am to them has not changed from the way I have been until now, either those five guys were in a group, or as individuals, as I believe that we are here now because we are somehow linked by fate.

Though three of them will be starting to walk on a different path with their own decisions, no matter where they are, no matter what situation they are in, my feelings toward them will never change.

I know for sure that those three who have always been trying their best, will continue sending inspiration and happiness toward many people.

SMAP will always be the wonderful five guys, and will continue staying not only in you fans' hearts but also in my heart forever."