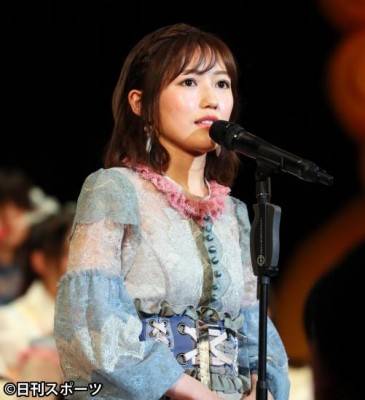 AKB48 Team B member Watanabe Mayu (23) announced that she would be graduating from the group by the end of the year.

On June 17, Watanabe gave a speech after winning the second place on the general election two years in a row.

She said, "This year, I stood as a candidate making it as my last election. I have been participating in the general election since the first time, and thanks to you fans' support, I was able to stay as one of 'Kami 7' this whole time. I cannot thank you guys enough.
As this was my last election, and I won the first place back in 2014, it was my challenge to get the No.1 position one more time, but unfortunately, the result was the second place. However, until today, my fans have been supporting me so much, and through the handshake events and Twitter, they also gave me so many supportive messages. I spent these days very happily. I cannot say there is no regrets, but I do feel happy to receive this second place.
Today, I have an announcement to make to people watching TV, watching through live viewing, and people who are here now.  I, Watanabe Mayu, am graduating from AKB48. I loved AKB, and had an audition when I was 12. Then I joined the group. This April was the 10th anniversary since my debut, and I became 23 years old. As a member of AKB, I have experienced a lot, and learned a lot. I decided to step out to the outside world, to begin a new experience. There are now many reliable juniors, and I would like to entrust the future of AKB48 to them. As I will be graduating by the end of this year, I may not have that much time left, but I want to perform my mission as an AKB member.
Anyway, thank you for your support to get me the second place!"

Watanabe also revealed that she was thinking of the graduation these past 2-3 years, and she made the final decision on her own.
In the end of the speech, she clearly stated there was nothing left for her to do as a member of AKB48.