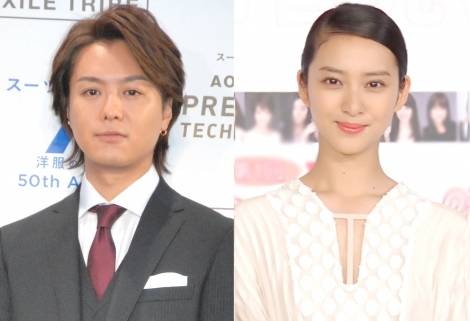 On September 1, EXILE's TAKAHIRO (32) and actress Takei Emi (23) announced that they have registered their marriage on and Takei is currently three months pregnant.

At this moment, no plans have been made for the wedding ceremony and reception party, and they're not planning on holding a press conference regarding their marriage.

TAKAHIRO and Takei met through NTV drama "Senryokugai Sousakan" back in 2014, and there was a report that they were in a relationship in April 2015, though both of them denied it back then.

"We, EXILE TAKAHIRO and Takei Emi, would like to make an announcement that we have registered our marriage today. We are also blessed with a child, and we are welcoming a new member into our family next spring."

They also revealed, "We met through a drama. While spending time as colleagues and friends, we were both attracted to each other's personality, thus we started dating with marriage in mind.

Since then we have been spending this past 2 and a half years improving ourselves through friendly rivalry, and supporting each other."

"We would like to continue devoting ourselves in order to better ourselves while respecting each other without losing our feelings of gratitude." The couple wrote.

TAKAHIRO joined EXILE after winning the group's new vocalist audition in 2006, and he also started his career as a solo singer in 2013. He made his acting debut with 2014 NTV drama, and he has been active in movies and stage plays.

Takei made her debut after winning "The 11th Japan Bish?jo Contest" ('Model Division' and 'Multi Media') back in 2006. She became a house model for "Seventeen" in 2007, and made her drama debut with 2009 Fuji TV drama "Otomen." She has been in many dramas and movies since then, and is currently starring TV Asahi drama "Kurokawa no Techo."