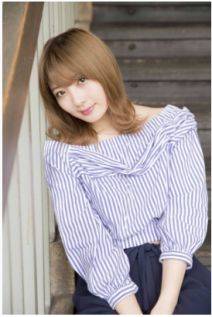 Former NMB48 member and rock band Over The Top vocalist Kishino Rika (23) has announced that she will marry basketball player Nakahigashi Taito (25). They are also expecting a child together.

On Over The Top's official website, Kishino announced, "I am marrying someone I have been dating for some time. He is Nakahigaki Taito-san of the Nagoya Diamond Dolphins. We plan to register our marriage in mid-January, and we are also expecting a baby."

As a result of Kishino's marriage and pregnancy, Over The Top will be disbanding. They will also be canceling their appearances from events they are scheduled to appear in. A message has been published on their website apologizing to fans and supporters.

Kishino joined NMB48 as a first generation member in September of 2010 and made her debut with Yamamoto Sayaka and others on New Year's Day in 2011. She graduated from the group in October of 2016, then formed Over The Top. The band made their major debut with "Bokura no Hata" in May of last year.