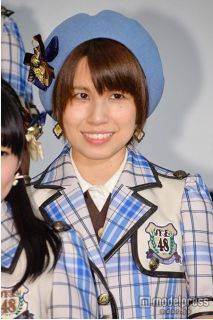 On April 7, she revealed on Twitter that she married a non-celebrity man last November. She shared a photo of her wedding dress and wrote, "I am making this announcement as I was able to have a ceremony today with family only. We will spend each day with compassion in order to build a warm family."

Nakanishi joined AKB48 in 2007 as its 4th generation member, then transferred to SKE48 the following year. After leading the group as its captain, she graduated in 2015.