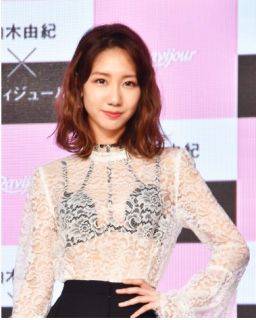 Kashiwagi, who was appointed as the ambassador to the brand's new project, commented, "I am nervous and happy that I have been appointed to such an important role. Rather than being an inspiration to women, I hope to be an ambassador that can grow together with everyone."

Ravijour will be launching a project called 'Upgrade', which follows the theme of "upgrading from a girl to a grown woman."

Kashiwagi, who appeared at the event wearing the brand's merchandise beneath a lacy top, said, "Since I am the eldest in AKB, I feel like I had no choice but to become an adult." She continued, "I've been involved in projects that were geared more toward men, like gravia, but finally, I have been given the opportunity to offer women."