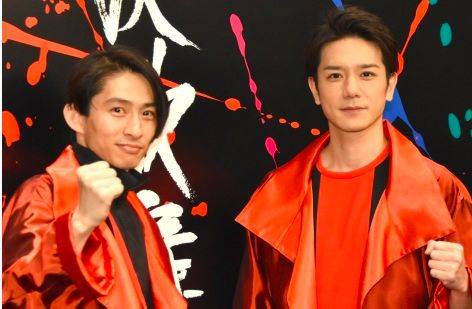 V6's Miyake Ken and Tackey&Tsubasa's Takizawa Hideaki have formed a new unit called "KEN?Tackey" and will be making their CD debut with "Gyakuten Lovers" this summer.

KEN?Tackey gave their first performance on the first night of 'Takizawa Kabuki 2018' at Shinbashi Enbujo. They announced, "We had been receiving requests from our fans and finally. Thank you for waiting."

The two have been working together since 'Takizawa Kabuki 2016.' At that time, Miyake had joked, "I hope we can have a delicious relationship as Ken and Tackey (a pun on Kentucky Fried Chicken)." Since then, they have starred together in CMs for KFC and will also star in their new CM as KEN?Tackey in late May.

On his other half Imai Tsubasa, who went on hiatus due to reoccurrence of Ménierč disease, Tackey commented, "I haven't spoken to Tsubasa yet, so I haven't grasped the situation." He called out to him, "First of all, I really want him to recover. Please don't rush. I will be waiting."