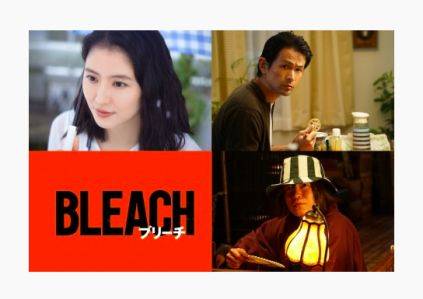 Additional cast members for the upcoming movie 'BLEACH' have been announced.

'BLEACH' is the live action film adaptation of Kubo Tite's popular manga series. It tells a story of a boy named 'Kurosaki Ichigo', who receives soul reaper powers from a soul reaper named 'Kukichi Rukia.' Ichigo will be played by Fukushi Sota and Rukia by Sugisaki Hana.

At this time, Nagasawa Masami, Eguchi Yosuke, Tanabe Seiichi, Mano Erina, and Koyanagi Yu have been added to the cast.

Nagasawa will play Ichigo's mother 'Masaki,' who dies while protecting her son. After Masaki passes away, Ichigo is raised by his father 'Isshin.' Eguchi will take on this role. Meanwhile, Tanabe will play 'Urahara Kisuke,' who owns a small convenience store while assisting soul reapers behind the scenes.

Mano and Koyanagi have been cast as Ichigo's classmates 'Inoue Orihime' and 'Sado Yasutora' respectively.

Movie 'BLEACH' will open in theaters on July 20.