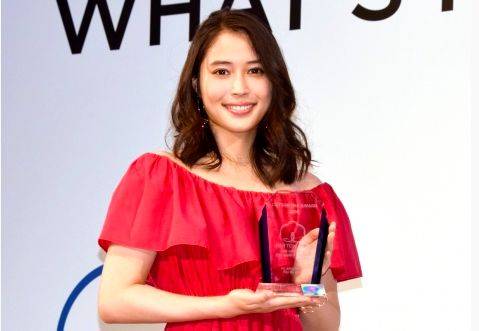 Actress Hirose Alice (23) attended the awards ceremony for the 'COTTON USA AWARD 2018' on May 9. During an interview at this event, the actress confirmed her rumored relationship with basketball player Tanaka Daiki (26).

Just the other day, it was reported that actor Katsuji Ryo (31), who is her senpai at her agency, is dating former AKB48's Maeda Atsuko (26). She commented, "I was surprised to see it on the news. I will ask him when I see him at the office next time." When asked about how her love life is going, she replied, "I am having a good time."

Back in February, 'Shukan Bunshun' reported that Hirose and Tanaka are in a romantic relationship. In an ORICON NEWS interview, both agencies responded, "They are in a serious relationship." Hirose was asked about her relationship with Tanaka when she appeared at another event last month to which she answered, "I leave it up to your imagination."

The 'COTTON USA AWARD' is given to notable persons who fit the image of "kind," "refreshing," and "having a strong sense of responsibility." While holding the award, Hirose said, "This is my first award after being in showbiz for 10 years. I am very happy." She shared her love for cotton saying, "I utilize cotton, and I also give it to my friends for the celebration of the birth of their babies. It feels very nice on the skin."