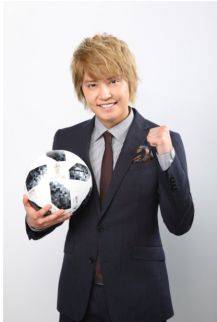 Tegoshi Yuya (NEWS) has been appointed as the main caster for NTV's coverage for the upcoming '2018 FIFA World Cup.' Additionally, NEWS' new song "BLUE" has been selected as the program's theme song.

The '2018 FIFA World Cup' will start on June 14 in Russia. Tegoshi previously served as the main caster for NTV's 2014 coverage of the World Cup in Brazil. He commented, "While enjoying it myself, I hope to deliver the of the heat of the festival of the FIFA World Cup."

"BLUE" represents the blue of the Earth as well as the image color of the Japanese representative team. It's described as a number with an impressive chorus and an uplifting feeling.