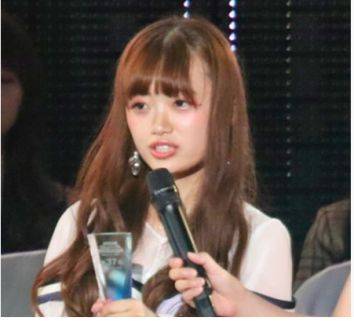 On June 16, which was the day of the '10th AKB48 World General Election,' internet program 'Bunshunho live' reported that NGT48 member Nakai Rika is dating one of her fans and is partially living with him. The following day, she appeared on TV Tokyo's 'Seishun Koukou 3-nen C-gumi', where she apologized regarding the scandal.

A new project was supposed to start on the program on this day, but there was a change of plans as Nakai stepped forward to explain the situation. She revealed that she was surrounded by four reporters on the morning of the 14th, "I told the staff that I was interviewed. I was scolded at an early stage."

On last week's program, the program's cast folded a thousand paper cranes to encourage Nakai for the upcoming General Election. However, this means that Nakai already knew that the scandal would be reported when she accepted the paper cranes. When asked about this, she responded, "I saw that everyone worked hard, so I was filled with guilt. Even though I knew this would happen..."

Then, comedian duo Maple Chogokin's Kazlaser questioned her, "Are you going to refund them?" referring to the fans who cast their votes for her in the General Elections, continued by a question from one of the students in the cast, "What is the most important thing to you right now?" Nakai answered, "It will always be my fans. Although it might sound superficial right now. As usual, they came to see me on the next day at a handshake event."

Towards the end of the program, she reiterated, "My fans who support me are the most important, and everyone in the 48 groups are doing their best, so I hope you don't think bad of me." To atone for the scandal, Nakai was demoted from assistant class teacher to student on the program.