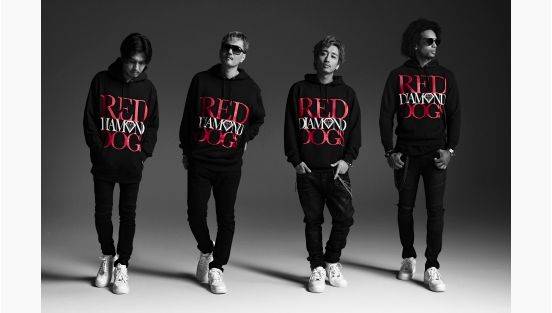 This song is a support song for professional baseball player and ATSUSHI's good friend Matsuzaka Daisuke, who transferred to the Chunichi Dragons this year. Matsuzaka has been using it as his entrance song as he steps into the mound.

ATSUSHI wrote "RED SOUL BLUE DRAGON" as he "wanted to do something for Matsuzaka-kun, who is the same age as me and whom I have known for over 15 years, as he was returning from an injury. The only thing I could do was music." His music partners DOBERMAN INFINITY, JAY'ED, and MABU make guest appearances in the song.

The PV features appearances by celebrities from different fields who were also born in 1980. Olympic athlete Suetsugu Shingo commented on his relationship with ATSUSHI and Matsuzaka, "Although we are from different genres, we are actively doing our best in the things we love, such as baseball, song, and racing." From showbiz, Oshima Miyuki (Morisanchu), Daigo (Chidori), and Murakami Kenji (Fruit Punch) make appearances as the umpire and batters.

In addition, EXILE's Matsumoto Toshio, USA, MAKIDAI, AKIRA, and TAKAHIRO, as well as Kuroki Kenji, SHOKICHI, NAOTO, and Sekiguchi Mandy, who all played baseball as students, participate in the video to cheer on Matsuzaka.