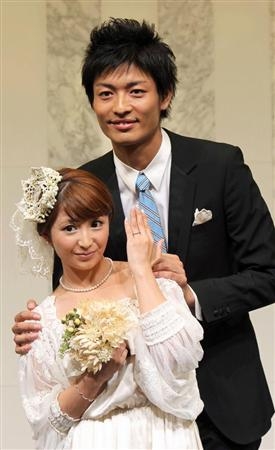 by Shiso
On May 30th, former Morning Musume member and talento Yaguchi Mari (30) and actor Nakamura Masaya (27) filed for divorce. After officially registering the divorce, they made the announcement through both of their agencies.
Though the announcement doesn't clearly state the details for their divorce, one of the biggest reasons is said to be Yaguchi's illicit affair, which was reported on the June 4th issue of "Shukan Josei" (released on May 21st).
According to the magazine, Yaguchi had a few drinks with some men and women back on February 22nd, and on that night, she brought model Umeda Kenzo (25) over to her place. The next morning, her husband Nakamura ran into them at the house when he came back from work ahead of schedule, and apparently, the couple began living separately since then.
They stated, "We have decided to walk separate paths", after many discussions via emails and a proxy from each of their agencies.
Reportedly, both of them intended to avoid the divorce at first, however, they concluded that it was difficult to continue their marriage.
Regarding the distribution of property and compensation, both of their agencies said that they would withhold the agreement, as it is a private matter.
Yaguchi currently has 5 regular programs, however, she's been absent from all of them since the 24th due to acute gastroenteritis. According to a related party, her condition is "getting better, but she hasn't recovered completely yet." Her activities are to resume when she is completely recovered.
=====
*Updated Note
On June 4th, Yaguchi's agency announced that she will leave three of her regular programs which include, NTV's "Hiru Nandesu!", CBC's "Gogosuma ~GO GO! Smile!~", and AmebaStudio's internet program "Joshiryoku cafe ~Yaguchinge-ru~." According to the agency, they are currently discussing her other two regular programs (NHK E-tele's "Fukushima wo Zutto Miteiru TV" and TBS' "Job Tune") as well.
=====
Source & Image: Sanspo (1+2+3+4)
*Image used is from the press conference for their marriage held on May 22nd 2011

Fujiwara Tatsuya to marry his non-celebrity girlfriend this year

I really love this couple T^T

Hope she can get back on track.Let her learn her lesson before trying to do anything else to ease the tension on her

Mari... I really respect her as a variety talent, but she should know more than anyone else what something like this can do to affect her fans and her image. :( I feel so bad for the guy though. :'(

This is really disappointing to hear. I was so happy when I heard these two were getting married. While I understand people make mistakes, Masayan doesn't deserve this. I've lost my respect for Yaguchi Mari now.

It's depressing to hear about this news. :/ I really adored her. Though, what takes a huge hit is that the guy she cheated with, happened to be someone that Masaya possibly knew. Umeda attended their wedding after all. :c

Ah well, was hoping for the best for these guys, I always thought Mari had her head on a little better than some of the others. Don't know what he did or didn't know about her before they got married but I'm sure he had a clue and tried it anyway, it's obvious she didn't take this as seriously as he did, or maybe she broke the rules ("I don't care what you get up to as long as it doesn't make the tabloids" or whatever) but either way she's done some serious damage to her image and her life. Hope she wakes up and realizes that before she ends up further in the gutter. If she wanted to play around she should have just stayed single. No reason to hurt people with selfishness.

Nakamura seems like a pretty decent guy, I hope he wasn't too disillusioned and hope he can put this behind him, and find someone he can work it out with. At the worst people are laughing at him but that'll pass.

I missed yoooooou though um... before the shutdown i kinda inactive on here lol *hugs*
1 0
Reply · Report · Share

@MinahMyu geeeehhhh, not sure if it posted my reply to you ~ I'm on Chrome and it hates me or TH or probably both. I'm so tech unsavvy it hurts...
0 0
Reply · Report · Share

@MinahMyu *hugs* back at ya! I keep coming back to this madhouse because of you and a few others who are decent, intelligent, real people that make my days bright. I noticed you were missing before TH went down *sadface* but I was hoping it was rainbows and sparkles keeping you away. So glad you're here again!!
0 0
Reply · Report · Share

awww they just got married too.

Its really sad... But everybody made a mistake. Even idol made mistake...

We don't know all information about heir relation after the wedding...

it still does not justify cheating...Yaguchi was the 1 who cheated & she even tried to blame the whole thing on Nakamura & claims that he was "abusive" to her, but I have doubts about that...if your husband was abusive to you, the last thing you would do is bring your lover to your home. It just feels like she's just making up excuses & blame it on the husband to save her own arse. I also heard that she is not even remorseful to her husband & did not even apologise to him for having the affair. And now it's rumored that this is not the first time that Yaguchi has cheated on her husband, Umeda claims that she has slept with several other guys while she was still married. although yes, we don't know what happens behind closed doors, but 1 thing we are sure of is that she definitely cheated & knew it was wrong, & we can all agree that Yaguchi's reputation is tarnished because of her big mistake.
0 0
Reply · Report · Share

I am very disappointed in Yaguchi. She was one of my favorites but she has lost my respect for this act. I expected much better from her and I was overjoyed when she got married but this is just disappointing. I really hoped that they would have a good family but she has really hurt him. Yaguchi what was going through your mind? What about all the fans and girls that look up to you? And people who state that she was justified in her acts need to shut up and wake up. Nothing is justifiable about cheating on someone who cares and loves you dearly. This is just embarrassing and heartbreaking.

I have lost all respect for this girl, I never liked Yaguchi and now I despise her. Her first stupid mistake was cheating, but what's even more stupid was bringing her lover to her house. Seriously, if you want to have an affair, why would you be this stupid enough to screw your lover in your own home? Apparently her husband arrived home and caught the lovers in bed, the lover Umeda allegedly hid in the closet when the husband got home.

Now this whole cheating fiasco has become so scandalous now, and Yaguchi is copping so much criticism from the public and also from other celebrities.

If you don't like being in a monogamous relationship, don't get married. How can this be so difficult to understand?

This was bound to happen tbh. People cant overcome that much of a height difference... jk

her lover Umeda is also over 190cm, apparently Yaguchi has a thing for tall guys...
0 0
Reply · Report · Share

Anyway, it was very weird reading that Mari had an affair.

there's rumors now that this is not the first time Yaguchi has cheated, the lover Umeda spilled the beans recently and accused Yaguchi of having cheated on her husband with several other guys, including Shirota Yu, Oguri Shun and a married Johnny's guy. There's no concrete info about the other alleged affairs though...
0 0
Reply · Report · Share