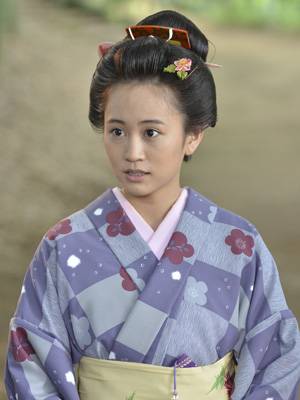 It was revealed that former AKB48 member Maeda Atsuko will be starring in NHK's new period drama entitled "Asaki Yumemishi ~Yaoya Oshichi Ibun" which will start airing in September.

Though Maeda has appeared in NHK Taiga drama "Ryomaden" previously, this would be her very first period drama as the lead star.

The drama will be based on "Yaoya Oshichi no Houka Jiken (lit. Yaoya Oshichi's arson case)" that has been handed down. It's a story about "Oshichi", a daughter of the greengrocer in Edo period. Oshichi falls in love with a page at a temple where she evacuated to after the great fire. After she goes back to her home, she commits arson because she thought she would be able to go back and live at the temple with him again if there was another fire. She is, however, burned at the stake for her crime.

For the drama, a new setting will be added so that Oshichi's crime ends up being a false accusation, and it will depict Oshichi as someone who becomes a criminal on her own initiative in order to save her first love "Kichiza."

The temple page, and Oshichi's lover "Kichiza" will be played by Ikematsu Sosuke, whom Maeda has previously co-stared with in movie "Moshi Koukou Yakyu no Joshi Manager ga Drucker no Management wo Yondara" and TV drama "Q10". Other cast members include Nakamura Masatoshi, Takeshita Keiko, and Hiraoka Yuta.

Maeda commented, "Oshichi is a girl who is honest with herself, so I hope I can express her earnest heart straight. I would like young people who don't know about 'Yaoya Oshichi' to watch it."