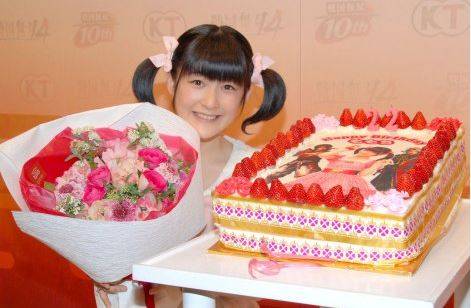 With a smile, Momochi said, "Recently, a good thing happened to me." Aside from the group's 10th year anniversary and her 22nd birthday on the 6th, she announced, "My graduation from college has also been decided." She continued, "So many happy things!" and, "I'm on the winning team!"

When asked what she wants to do after graduation, Momochi stated, "My goal for this year is to avoid being hated." With that said, she shared that her senpai Yasuda Kei told her to "think about 'booing as a form of love'." She then proclaimed, "I will do my best to receive booing as love." As for her trademark "Momochi musubi," she insisted, "I won't stop doing it until it becomes popular."

During the event, Momochi was presented with a birthday cake and a flower bouquet. Happy with her gifts, she said, "Nyan nyan, I will be 22."