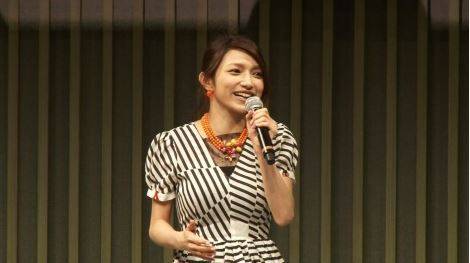 On April 21st, talento Goto Maki, who has been on an indefinite hiatus since December of 2011, made a surprise appearance at the 10th anniversary event for Capcom's popular game 'Monster Hunter'.

To commemorate the 10th anniversary of 'Monster Hunter', there will be a 'Monster Hunter Exhibition' at Shibuya Hikarie for about a month starting on August 2. As its official supporters, Golden Bomber's Utahiroba Jun and Nogizaka46 members Shiraishi Mai, Matsumura Sayuri, Saito Yuuri, Nagashima Seira, and Nishino Nanase were chosen.

Goto is known as an enthusiastic fan of 'Monster Hunter'. Her attendance at the event was decided on that day. This marked her first time appearing at an event in about 2 years.