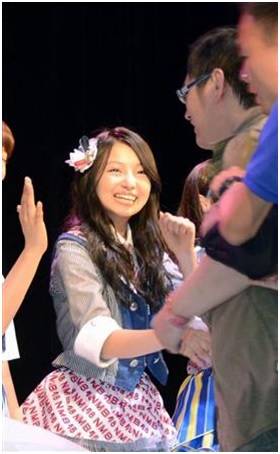 On July 29, 10 members from popular idol group AKB48 and its 5 sister groups appeared at a cultural exchange with their fans in Shanghai. About 700 fans appeared for their talk show.

All Nippon Airways along with AKB48 and its sister groups were in Shanghai to promote cultural exchange in Asia. The cultural exchange hopes to encourage Japanese and Chinese youth to visit and study abroad in each others' respective countries.

During the talk show, Murase Sae, from Osaka-based NMB48, introduced takoyaki and funny cultural idiosyncrasies, while SKE48's Ishida Anna talked about the charm of Nagoya. Each member introduced sight-seeing areas and famous "local prides" from their respective cities.