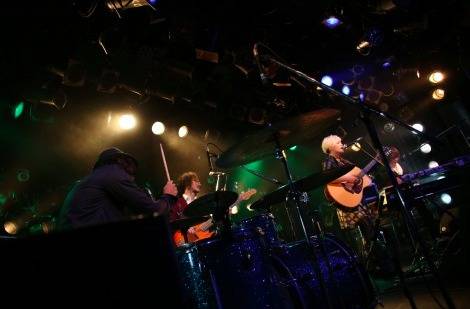 yui's band FLOWER FLOWER will be releasing their first album "Mi" on November 26.

yui put a halt to her solo activities in 2012 and formed the band FLOWER FLOWER. While they have released three digital singles, the album will mark their first physical release. yui commented, "I thought anything would sound good with these members, but it's true that there was some feeling of 'destruction' somewhere in my heart. I'm not sure how people will respond to it, but I hope to give some kind of shock."

The album will include a total of 13 songs including "Tsuki", which was used as the CM song for 'au' last summer, and "Subarashii Sekai", which was recently picked up as the ending theme for TV Tokyo's drama 'Tamagawa Kuyakusho OF THE DEAD'. The limited edition will come with a DVD containing both live footage and backstage footage from the band's live held last October.

One of the tracks off of the album, titled "Toumei na Uta", will be available for download on October 29. Until the album hits stores, one song will be released digitally for 4 consecutive weeks.