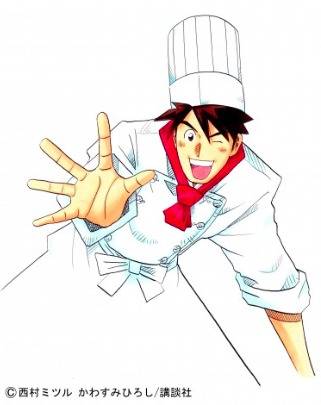 In the past, Sakurai has challenged himself to various professions for his roles from a butler in "Nazotoki wa Dinner no Ato de" to a private tutor in "Kazoku Game". This time, he will take on the role of a chef who works at a Japanese Embassy in Vietnam. On playing this unique role, Sakurai commented, "Not only do I need the art of cooking, but I also need passion. I hope to deliver human conflict and support together with spectacular dishes."

Written by Nishimura Mitsuru and illustrated by Kawasumi Hiroshi, 'Taishi Kakka no Ryourinin' is a manga series that was serialized in 'Morning' from 1998 to 2006. Sakurai will play the protagonist, a gentle and serious French chef named 'Osawa Ko'. Osawa was a sous chef at a five-star hotel, but he had a problem with this job as he was unable to see the faces of his customers. After finding a pamphlet advertising for a official residence chef position in a diplomat office, he takes the job and ends up becoming a chef at the Japanese Embassy in Vietnam.

The drama will be written by Izumi Yoshihiro, produced by Takamaru Masataka, and directed by Sato Yuichi. While the original manga deals with diplomatic matters of that time, the upcoming drama will consider present-day issues.

The filming for the drama began on November 1. "Invite your family for New Year's, and watch it on an empty stomach," said Sakurai.