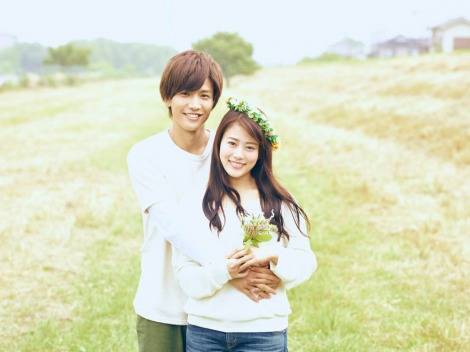 Arikawa Hiro's novel "Shokubutsu Zukan" would be getting a live-action film adaptation, and Iwata Takanori of EXILE and Sandaime J Soul Brothers from EXILE TRIBE, and actress Takahata Mitsuki would star in it. For both Iwata and Takahata, this marks the very first movie to be the lead roles.

"Shokubutsu Zukan" is a heart-wrenching love story. The story begins where an office worker 'Sayaka' (played by Takahata) whose work and private life are not going well, finds a man (played by Iwata) lying in front of her apartment. "Young lady, if you wouldn't mind would you take me with you?", the man, named 'Itsuki', asks her, and that's how they start living together.
Unexpectedly, Itsuki is good at cooking, and as he knows quite a lot about flowering herbs, he shows Sayaka the world of wild herbs. While spending daily life together, the two gradually get closer, but, the man who Sayaka only knows his name, has a secret.

The film is directed by Miki Koichiro ("Torihada : Gekijouban"), and it is set for release in 2016.