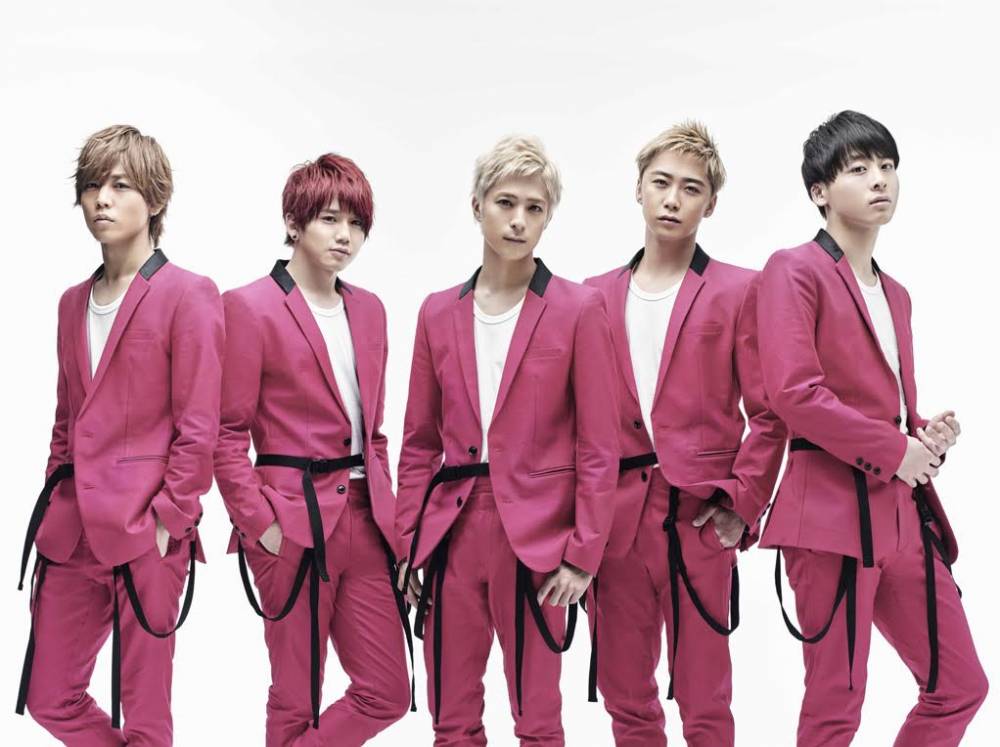 Japanese dance/vocal group Da-iCE will make their American performance debut at Fanime later this month at the San Jose Convention Center, May 27-30.

The groundbreaking five-member group has scored multiple chart-topping hits in Japan, becoming a pop music sensation for their multi-octave range, modern dance style, handsome looks, and sophisticated fashion. Their concert at Fanime will be the first chance for American fans to see the group's energetic stage show that has sold out concerts across Japan.

The five members of Da-iCE (pronounced "Dice") — Yudai, Sota, Taiki, Toru, and Hayate — have visited the U.S. twice before for dance lessons with America's top choreographers, and each member is looking forward to meeting American fans in the intimate Q&A and autograph sessions at Fanime. The San Jose concert (the group's first live show for non-Japanese audiences) will feature a full showcase of songs and dancing, matching the power of their recent tours.

Da-iCE will also bring limited quantities of official merchandise from Japan (available at the Kinokuniya booth) — CDs, DVD, T-shirts, towels, mini-poster + ID card sets (first release at Fanime), tote bags, iPhone Cases — and there will be a rare and limited-admission Da-iCE photo session for fans who purchase a special goods package at the event.

Da-iCE have just released their 8th single "WATCH OUT" (from their second major-label album EVERY SEASON) and third live DVD "Da-iCE Live House Tour 2015-2016 -PHASE 4 HELLO-" on April 6. The group will embark upon their first nationwide large-venue tour of Japan in July.

Da-ice created their name as a combination of "dance" (the group concept) and "dice" -- when the energy of their fans is added to the 5 members, together they form the six sides of dice. The intentional "a-i" in the band's name means "love" in Japanese.

Y?dai was previously the lead vocalist of an a capella group, S?ta was working as a solo vocalist, and Taiki, T?ru, and Hayate were working as dancers before they met in January of 2011 and started working together, seeking to establish a new style of vocal group.

They hired famous dancers both within and outside of Japan to help them, and incorporating the choreography they learned, they focused on performing at a world-class level– doing over 100 live shows a year at venues as varied as clubs to stadiums.

In 2012, they opened for their agency's AAA tour to much acclaim, then received a flood of offers to perform many large-scale music festivals, fashion events, and magazines. In December of the same year, their 1st mini album "Da-iCE" achieved a ranking of 15 on the Oricon Daily Ranking Chart, and the song "Splash" from that album ranked 1st on the Recochoku Ringtone Daily Chart.

Their 1st indie single "I'll be back", released on Wednesday, June 5, 2013, achieved a ranking of 14 on the Oricon Weekly Ranking Chart (and went as high as 12 on the Daily Ranking Chart). The fact that they were able to get two songs ranked 1st consecutively on the Recochoku Ringtone Daily Chart was considered unprecedented for indie artists and quite notable.

It goes without saying that they worked on their visual appeal from their indie days, but Y?dai also possesses an earthy voice cultivated by his experience in a capella– a voice that wraps one up in a deep embrace, while S?ta possesses a set of feminine vocal chords with an unusually high tone, or "baby" voice, and the interweaving of the two results in a four-octave range with an overwhelming presence that you just don't feel with other vocal dance groups.

In October, they implemented the previously unheard-of plan of letting their fans decide their debut song by nationwide voting. This became a popular topic of discussion on social media, and they gathered over 10,000 votes. The votes determined that their debut song would be "SHOUT IT OUT", a song that they often opened their live shows with; a song that was thought of as being representative of Da-iCE as their "starting song."

According to plan, they debuted under UNIVERSAL SIGMA (of the music label Universal Music Japan) on Wednesday, January 15, 2014 with the single that over 10,000 votes had decided– "SHOUT IT OUT", and it shot up to 2nd place on the Oricon Daily Ranking, achieving 4th place on the Weekly Ranking, a spectacular debut.

They followed up their debut with the release of their 2nd single "TOKI" on Wednesday, April 9th, which also achieved a ranking of 3rd on the Oricon Daily Ranking and 5th on the Weekly Ranking.

On Wednesday, October 15th, they released their 1st album "FIGHT BACK", which included the 3 singles they released after their debut, achieving a ranking of 1 on the Oricon Daily Ranking and 3rd on the Weekly Ranking.

The next year, they released their first ballad single "M? Ichido Dake (Just One More Time)" on Wednesday, January 7, 2015, which was ranked 2nd on both the Oricon Daily Ranking and Weekly Ranking.

In May, they started their nationwide tour "Da-iCE Live House Tour 2015 – PHASE 4 -" and followed up their "Akasaka BLITZ Performance – 2DAYS" final performances on Wednesday, July 29th and Thursday, July 30th with the release of their 6th single "Everybody" on Wednesday, August 12th. "Everybody" ranked 1st on the iTunes Weekly Album Ranking and 3rd on the Oricon Weekly Ranking.

In November, they released their 4th single of 2015 and 7th overall single "HELLO," ranking in at 2nd on the Oricon Daily Ranking, 3rd on the Weekly Ranking, and 1st on the iTunes Weekly Album Ranking.

On January 6, 2016, they released their much-awaited 2nd album "EVERY SEASON", achieving a rank of 1st on the Oricon Daily Ranking. On the Weekly Ranking, they got around 50,000 more points than they ever had before, netting them a 2nd place ranking.

Starting in July, they will be holding their first Hall Tour across Japan, culminating in a performance at the Tokyo Nippon Bud?kan on Tuesday, January 1, 2017, which has been a long-term goal and a dream come true for them.

Befitting their meteoric rise, they were awarded the 2015 29th Japan Gold Disc Award for "Best 5 New Artist." Furthermore, in Japan they are getting attention on TV and radio programs, magazines, and social media, etc with the catchphrases "Attractiveness Rating is high with a score of 75 (literally, "Facial Deviation Score of 75")" and "The Prettiest of the Pretty Boys (literally, the "Tokyo University student equivalent in the pretty-boy world")."