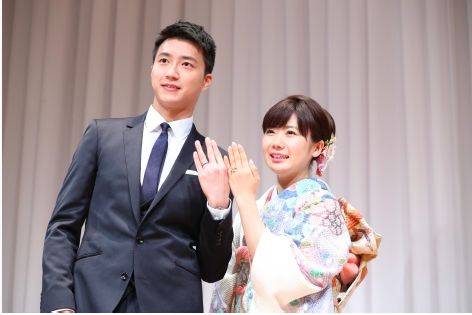 Fukuhara, who attended the press conference in a white and light blue kimono, announced, "I had everyone gather here today as I wanted to announce my marriage to Chiang Hung-chieh on September 1." She expressed her gratitude to her supporters, then called her husband on stage. He introduced himself to the crowd in Japanese.

The couple showed off their custom ordered rings, which were designed by Chiang with the motif of table tennis. Fukuhara revealed that they encouraged each other during the Rio Olympics, and with the Tokyo Olympics ahead, she stated, "He said he would support me no matter what I chose to do. His words made me realize that depending on the circumstances, it's possible to continue doing my best without giving up on my dreams."