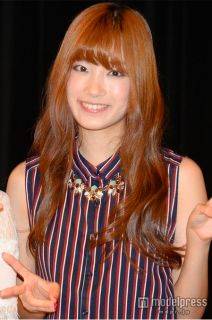 On April 13, former SKE48 member Yagami Kumi announced her marriage to a non-celebrity man. She also announced that she will be retiring from showbiz after this month.

Yagami wrote, "Last year I married a non-celebrity man that I had been dating for some time. I will be retiring from showbiz after this month to become a housewife."

Yagami passed SKE48's opening member audition in July of 2008. She was in the senbatsu from their debut single "Tsuyoki Mono yo" to their 11th single "Choco no Dorei."  She graduated from the group in spring of 2013 and later retired from showbiz, but she returned in October of 2015.