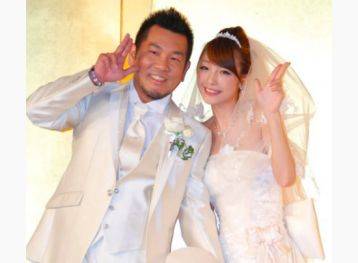 Comedian Fujimoto Toshifumi (49) and talent Kinoshita Yukina (32) have divorced on December 31. The couple made the announcement via their agencies.

In a written announcement, Fujimoto reported, "I apologize for this personal matter, but I, Fujimoto Toshifumi, would like to announce that I have divorced Kinoshita Yukina-san on December 31." He went on to explain, "As we both work in showbiz, we've had many disagreements and differences in lifestyles. After many discussions, this is our conclusion."

He continued, "Although we are no longer husband and wife, we will take responsibility in raising our children as father and mother. I apologize for all of the trouble caused to all persons concerned, but I ask for your understanding."

Kinoshita also announced, "I, Kinoshita Yukina, have divorced Fujimoto Toshifumi-san." She stated, "Although I have acquired custody over our children, he is the only father, and I am the only mother in this world to the two daughters. As such, we will work together as before in raising our children." Finally, she said, "To everyone concerned and also to my fans, I am very sorry for causing worries and troubles."

Fujimoto and Kinoshita tied the knot in August of 2010. They welcomed their first daughter in 2012, then their second in 2015. Back in July, rumors surfaced that the couple were nearing divorce. At that time, however, Kinoshita refuted the divorce rumors.