Miyazaki Aoi and Tamaki Hiroshi to appear in next 'Asadora' 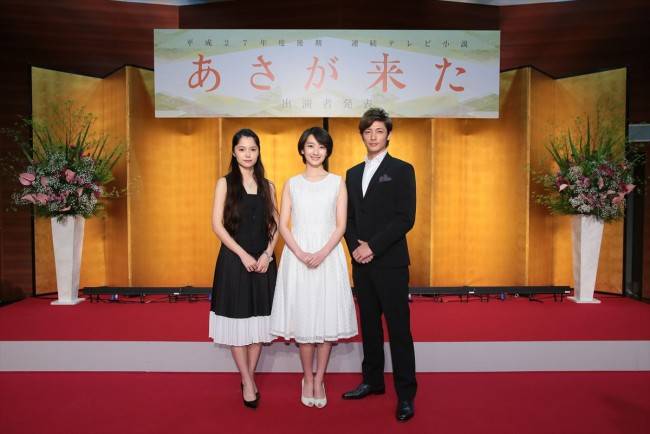 by HPriest
As reported in March, actress Haru was chosen as the next heroine for the new 'Asadora (Morning drama)' titled "Asa ga Kita".

Today, NHK introduced the other actors of the main cast and one of them is popular actress Miyazaki Aoi, who is going to play the heroine's older sister. It's a great addition to the new drama, considering that she herself already starred in the 2006 asadora "Junjo Kirari" and the 2008 taiga drama "Atsuhime".

Haru is afraid of becoming homesick during the 9-month long filming period and asked Miyazaki for advice. Unfortunately, she isn't the best person to consult, because she replied, "I got to film it in Tokyo back then, so I went home everyday."

Actor Tamaki Hiroshi is also going to support Haru as her on-screen husband in "Asa ga Kita". He commented, "It's been 12 years since my last asadora. I'm somewhat anxious about living in Osaka."

The remaining cast consists of Kondo Masaomi as Tamaki's father, Fubuki Jun as his mother, Enomoto Tasuku as Miyazaki's husband, Manda Hisako as Miyazaki's mother-in-law, and Tatsumi Takuro as her father-in-law.

"Asa ga Kita" is modeled after businesswoman Hirooka Asako, who lived during the end of the Edo Period to the Taisho Period. It depicts the life of "Asa" (Haru), who marries a man running a prominent money-exchange business in Osaka and makes every effort to run a colliery company, to establish a bank, and more on behalf of her prodigal husband.

aww i thought aoi and hiroshi are gonna be the mains but i guess not.