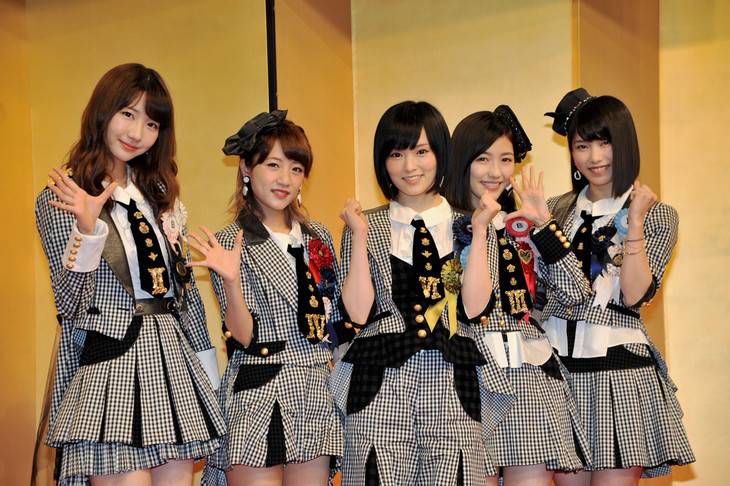 AKB48 will be in charge of the theme song for the next NHK morning drama 'Asa ga Kita'. This announcement was made on August 18 at NHK Broadcasting Center.

"Asa ga Kita" is modeled after a businesswoman named Hirooka Asako, who lived during the end of the Edo Period to the Meiji Period. This will be the first NHK morning drama where the story begins at the end of the Edo Period. As previously reported, the protagonist 'Asa' will be played by Haru, Asa's husband 'Shinjiro' by Tamaki Hiroshi, and Asa's older sister 'Hatsu' by Miyazaki Aoi.

As the group's representatives, Takahashi Minami, Yamamoto Sayaka, Watanabe Mayu, Kashiwagi Yuki, and Yokoyama Yui attended a press conference held on this day. On singing the theme song for a morning drama, Watanabe Mayu expressed, "It's like a dream. I am very happy." Takahashi Minami commented on the song's lyrics, "Akimoto-sensei told us that 'paper airplanes fly freely and straight when you throw them gently without too much power.' We sang this song hoping that we can have honest feelings."

Regarding the morning drama, Kashiwagi stated, "When I was in elementary school, we would watch the re-runs of morning dramas during lunch time, and the entire school would sing the theme song. So I hope that our song will become a song that everyone loves." Meanwhile, Yokoyama made reporters laugh saying, "I will do my best so that I can become an asadora (morning drama) heroine someday!"

This marks Yamamoto Sayaka's first time claiming center position. "I am very honored. I've wanted to eventually become center, so now that it's happened, it's hard to believe it," she said. Takahashi encouraged Yamamoto saying, "It's difficult to show your individuality in AKB48, but now that you've become center, you have to graduate from a 'karineko' (borrowed cat) and show your capabilities."

On Yamamoto's singing voice, Watanabe revealed, "She is really good at singing. When you hear it for the first time, I don't think you will notice that it's AKB48... Her voice is beyond AKB48's level!" Then Takahashi said, "Don't say such misleading things! We're all doing our best!"

'Asa ga Kita' will premiere on NHK on September 28. The release date for "365 Nichi no Kamihikouki" has not been determined at this time.