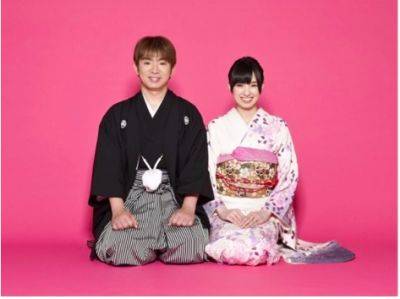 Comedian Hamaguchi Masaru (46) and talento Minami Akina (29) have gotten married. The couple made the happy announcement on their Instagram accounts.

Hamaguchi shared a photo of himself and his wife dressed in a kimono and announced, "It's a private matter, but I have registered my marriage with Minami Akina-san, who I have been dating for some time, on May 25." He expressed, "We were able to face this day thanks to everyone who always support us, all of our co-stars and staff as well as our parents, siblings, family, and friends, who have watched over us warmly."

He continued, "It would make us happy if you would continue to watch over us with unchanging love." Finally, he revealed, "My partner Arino-kun [of comedian duo Yoiko] served as the eyewitness."

Similarly, Minami reported, "To everyone who always support me. It's a personal matter, but I have an announcement. Today, on May 25, I married Hamaguchi Masaru-san, who I have been dating for quite awhile." She also stated, "We are still immature, but it would make me happy if you would continue to watch over us. I ask for your continued support."