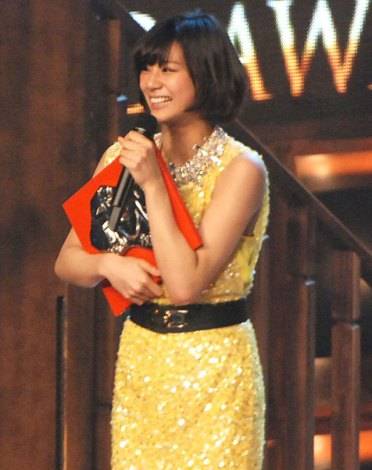 An award ceremony for the annual music awards show "The 56th Japan Record Awards" was held at the New National Theatre, Tokyo on December 30, and Nishiuchi Mariya (21) received the "Best New Artist" award. (You can check the other winner of the New Artist award on our previous post below!)

At the moment Nakama Yukie, who served as the host, called her name, Nishiuchi joined her hands with a surprised look. She then expressed her joy saying, "I did it, mom," and tears fell down her cheeks though she tried to hold them back.
She also said, "I would like to send this song to my mother who has always supported me, my local folks who are always cheering for me, and my preservers." She then performed her debut song "LOVE EVOLUTION" while shedding tears. 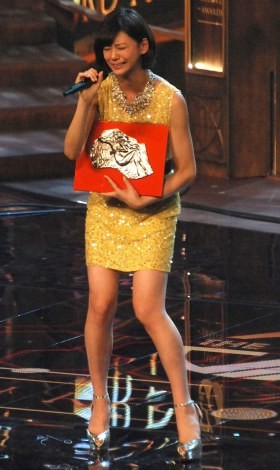 Nishiuchi began modeling for magazines when she was a second year junior high school student and is currently a house model for the fashion magazine "Seventeen." Her popularity is quite high among women in their teens and twenties. She made her debut as a singer with her first single "LOVE EVOLUTION" on August 20, and she is slated to release her second single "7 WONDERS" on January 28.

The award ceremony of "The 56th Japan Record Awards" was broadcast live on TBS.