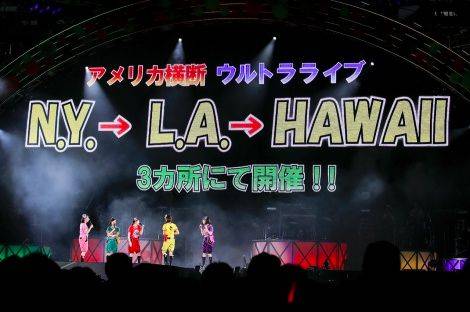 On April 2, Momoiro Clover Z wrapped up their dome tour "MOMOIRO CLOVER Z DOME TREK 2016: AMARANTHUS?Hakkin no Yoake" at Seibu Prince Dome in Saitama. During this performance, it was announced that the girls would be touring the United States.

The concert kicked off with the album lead song "WE ARE BORN" followed by "Monochro Dessan", "Gorilla Punch", and "Buryou Tougen Nakayoshi Monogatari". Some of the highlights of the concert included Tamai Shiori's solo piano performance for "Seishunfu", Momota Kanako's hoop dance during "Demonstration", Sasaki Ayaka's electric guitar performance for "Naitemo Iindayo", and Takagi Reni's tap dance during "Guns N'Diamond".

After performing the album songs, the second half of the concert started with an interval VTR playing "OVERTURE". During the second half, the group performed their popular songs such as "Z Onna Sensou", "Momoclo no Nippon Banzai", "Chai Maxx", and "Ikuze! Kaitou Shoujo".

For their U.S. tour, titled "America Oudan Ultra Live", Momoiro Clover Z will be making stops at New York, Los Angeles, and Hawaii.  More details on this exciting piece of news will be revealed at a later date.