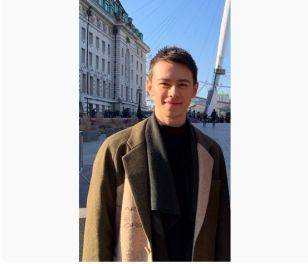 Wentz Eiji (34), who temporarily halted his activities in 2018 to study abroad in London, has returned and appeared on the variety program 'Kayou Surprise 2-Hour Special' on March 10. It was announced that he would be returning to the program as an MC beginning its April 7 broadcast.

It's been about a year and a half since Wentz left the program. Hiromi, who took over Wentz, grew impatient and went to London to find out what Wentz was really doing there.

Without making an appointment, Hiromi waited near Wentz's lesson studio and approached him when he made his appearance. He asked him what he had been doing this past year and what he plans to do in the future. In order to entertain Hiromi, Wentz took him to a sushi restaurant. As Hiromi kept asking him what his future plans are, Wentz finally responded, "I want to return [to Japan]."