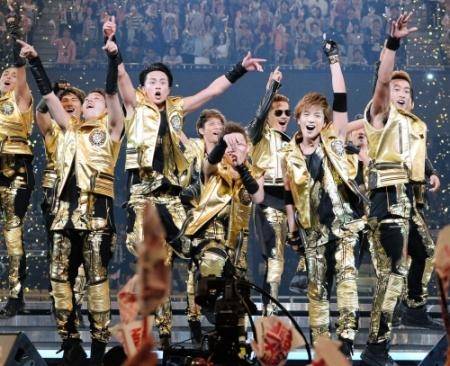 The final round of EXILE's new performer audition was held at the Nippon Budokan on April 27.

From a pool of about 2000 applicants, Shirahama Alan (20) and Sekiguchi Mendy (23) from EXILE's "younger brother" group GENERATIONS from EXILE TRIBE have been selected to join EXILE alongside three others, bringing the group's total number up to 19.

Aside from Shirahama and Sekiguchi, Iwata Takanori (25) from Sandaime J Soul Brothers, Sato Taiki who has been a supporting member in GENERATIONS since the age of 16, and Yamamoto Sekai, who was in Gekidan Shiki's production of "Lion King" were selected to join the group as well.

On this day, 5 regular applicants, as well as Iwata from SJB, and 5 performers from GENERATIONS competed for the final spots. EXILE members including leader HIRO (44) were the judges for the audition.

The selected members immediately performed with the group (minus leader HIRO who retired as a performer) EXILE's hit song "Choo Choo Train". The new EXILE will release their first single in July and go on their solo tour "AMAZING WORLD" next year.