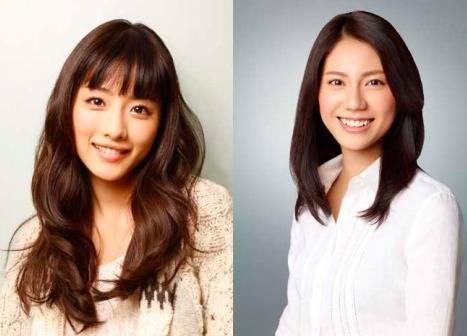 Actresses Ishihara Satomi and Matsushita Nao will be playing sisters in Fuji TV's upcoming drama 'Dear Sister', which will air every Thursday at 10:00 pm starting in October.

'Dear Sister' is a love comedy that depict the relationship between two sisters. This is the first time that the actresses are working together. Ishihara revealed, "Between filming [on set], I call her 'oneechan' (older sister) with familiarity." As for Matsushita, she stated, "I'm looking forward to what my cute younger sister will say and do to me."

Ishihara will play the 27-year-old younger sister named 'Fukasawa Misaki'. A natural born beauty, Misaki is good at being spoiled and has lived her life skillfully. Meanwhile, Matsushita will play the 29-year-old older sister named 'Fukasawa Hazuki'. An employee of the ward office, Hazuki is punctual and reliable, yet a little clumsy. She seeks to marry her boyfriend who is also her colleague. Hazuki was traumatized was a young child believing her mother only loved her younger sister Misaki.

One day, Misaki leaves home and suddenly appears at Hazuki's apartment. While the sisters have completely different lifestyles and personalities, they both hold a certain secret. Various troubles arise between the sisters as they begin to live together under one roof.

"I am excited about the role and setting since they have a punch. It would make me happy if people will look forward to what she is scheming every week," Ishihara expressed, while Matsushita commented, "Like the Fukasawa sisters, there are things you learn about yourself through your younger sister. I want to play my part, so that people will become envious about having a sister."

In their personal lives, Matsushita has a younger sister, and Ishihara has an older brother. Ishihara, who recently became an aunt, said, "The environment and troubles will change from now on, but I hope to talk and depend on each other more." Matsushita also shared, "We fight sometimes, but after we both entered our 20s, there are times when we are like friends."