Narimiya Hiroki and Sasaki Nozomi share a kiss for 'anan' 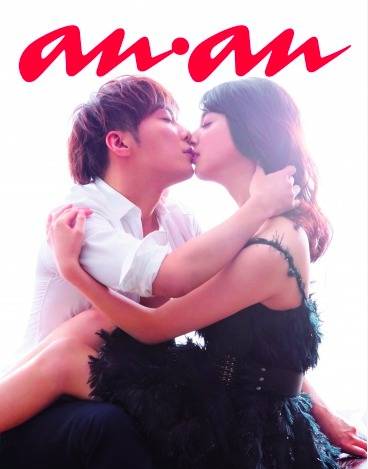 Actor Narimiya Hiroki and model/actress Sasaki Nozomi will be featured on the cover of women's magazine 'anan' that will go on sale on September 17.

This issue features the magazine's first 'Mote Cosme Award'. Mote Cosme refers to cosmetics that make you popular with the opposite sex. As a part of the feature, Narimiya and Sasaki challenge a situation of a couple with the image "a happy love that begins with the power of make-up".

While they've never worked together before, Narimiya and Sasaki belong to the same agency and have a senpai-kouhai relationship. The staff expected that the two would feel embarrassed acting out a couple, but they immediately got into their part once filming started. At times, Narimiya took the lead, and at other times, Sasaki led, creating a realistic image of a couple.

Narimiya said confidently, "Like a scene from a movie, I wanted to carefully portray a situation where a man and woman are attracted to each other like cut by cut. I challenged this shoot as an 'actor'." Meanwhile, Sasaki commented, "I think I was able to delicately play the role of a woman whose mindset changes every time she changes her lip color. I hope people can see the worldview of a happy love."